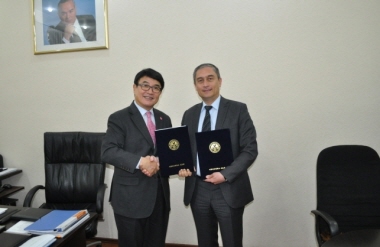 Ewha Womans University Medical Center, one of South Korea’s leading institutions for women’s health, is especially known for its treatment for women’s diseases, such as ovarian cancer and breast cancer. During the week-long visit, the hospital’s director Paik Nam-sun performed a total of 15 surgical procedures for Uzbekistani women’s cancer patients, including patients with breast cancer and thyroid cancer.

Paik also met with Laziz Tuychiev, deputy minister of health of Uzbekistan, and signed an agreement to share his hospital’s management system as well as gender-conscious approaches when dealing with female patients.

“We hope to continue to export our strategies and knowledge on gender-conscious medicine overseas,” said Paik. “Uzbekistan’s state-run hospital for women will be established based on our hospital’s system.”

During the visit, Paik also gave a lecture to a group of Uzbekistani physicians specializing in cancer treatment.

He also met with a health industry insider in Uzbekistan and discussed ways to attract Uzbekistani patients to his hospital in Seoul.