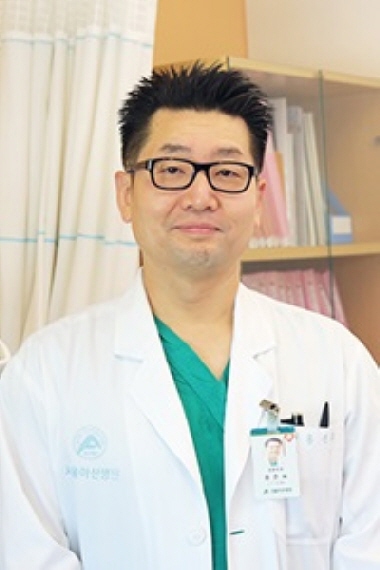 The Neuro Intervention Clinic and the Department of Plastic Surgery have recently cooperated in treating a patient with facial vascular malformation by simultaneously performing a procedure and a surgery, significantly improving patient convenience.

Mr. Park, who is in his thirties, had an asymmetrically protruding face in the right side due to phlebolith caused by the calcareous deposition of facial blood clots. The phlebolith needed to be removed to relieve pain in the face and the stress of appearance.

First of all, Professor of Radiology Dae-chul Suh performed sclerotherapy that blocks the inflow of blood into the malformed blood vessel. Sclerotherapy prevented bleeding even after cutting the site of phlebolith. Next, Professor of Plastic Surgery Joon-pio Hong successfully removed the phlebolith that measured 2 centimeters in diameter. The patient’s condition incredibly improved, and the patient left the hospital two days after surgery.

In the past, a common practice was to remove phlebolith after about two days until swelling caused by sclerotherapy went down. For this reason, patients had to be in and out of the hospital twice and went through general anesthesia twice. However, the collaborative approach involves both performing sclerotherapy and removing the vein stone at once, shortening the period of hospital stays by half.

Professor of Radiology Dae-chul Suh said, “The Neuro Intervention Clinic will continue to challenge the treatment of intractable disorders and the improvement of patient convenience through a multidisciplinary cooperation with closely related departments such as plastic surgery and otolaryngology.”