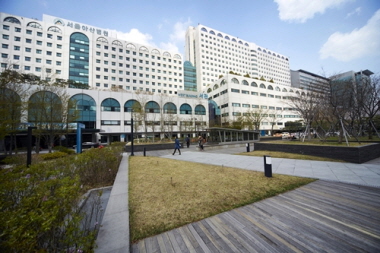 AMC was selected as the best general hospital by the 2016 Korean Net Promoter Score (KNPS) and the 2016 Best Companies to Work for Survey in a row. The photo shows a landscape of AMC viewed from the park in front of the West Building.

AMC was named No. 1 in the general hospital category of the 2016 Korean Net Promoter Score (KNPS) led by the Korean Management Association Consulting (KMAC) for two years in a row.

Reasons given for recommending AMC were

An official from KMAC said, “Recommendation is an action [by which] a customer willingly introduces and encourages others to experience the service that the customer has had. Enhancing patients’ willingness to recommend requires AMC to make a unique impression on them with distinguished medical services such as sophisticated surgeries and treatment.”

An official from the Team for Customer & Work Culture said that this result is significant in that most people consider carefully other people’s recommendations when selecting services, so an effort needs to be made to quickly identify the needs of customers to minimize their complaints and offer a positive experience.

AMC was also chosen as the top general hospital in the 2016 Best Companies to Work for Survey administered by the Great Places to Work (GPTW) Institute, which conducts extensive surveys of organizational culture. The online survey involved 32,513 respondents, including high school students, undergraduate students, job seekers, and employees from other companies. It was conducted for a month in October 2016 in three categories:

▲Pride about the future