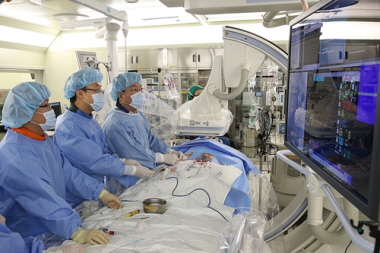 The aortic valve normally has three cusps, but some people have only a bicuspid valve. Both types of aortic valve may suffer from stenosis, as aging makes it hard for the valve to open and close. In the latest issue of the Journal of the American College of Cardiology (IF=17.759), a research team led by Professor Park Seung-jung, Professor Park Duk-woo, and Professor Ahn Jung-min of the department of cardiology published an article that verified the effectiveness of aortic valve stenting on those with a congenital bicuspid aortic valve.

Aortic valve stenting is a procedure where a doctor reaches a balloon up to the valve through the femoral blood vessel, inflates the balloon at the area between the narrowed valves, and places a stent to serve as the new valve. Despite the growing popularity of the practice, this study was the first to validate the effect of stenting on congenital bicuspid aortic valve stenosis.

Professor Park Seung-jung said, “It is meaningful that AMC verified an effect of stenting on aortic valve stenosis patients for the first time, in a situation where a great number of aortic valve stenting and relevant studies have been performed in Europe and the United States.”