The Most Admired Hospital in Korea for 11 Consecutive Years 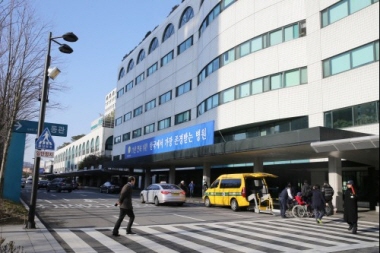 Another Meaning of Admiration: Dignity and Responsibility

“Taking it as an opportunity to look back on our social responsibility and roles.”

AMC was selected as the most admired hospital in Korea for the 11th consecutive year. The award for Most Admired Hospital is given to the hospital with the highest scores for excellent clinical performance and social contributions as rated by patients, their families, and medical professionals. A certificate award ceremony held in the grand auditorium (6F, East Building) on February 24 was attended by key position holders, including the president of AMC, Lee Sang-do, and invited guests, such as medical professionals and employees who have worked at AMC with challenge and passion since the hospital was established in 1989. Professor Lee Kyoo-hyung of the Department of Internal Medicine and Hematology said, “In the past, outstanding young doctors and nurses wanted to stay in their university hospitals, but these days, they prefer to work for AMC. I think it’s because we were recognized for providing quality health-care environments. I’m looking forward to a brighter future of AMC since everyone works hard with a sense of duty.”

AMC was selected as the most admired hospital for 11 consecutive years after garnering a total score of 7.27 points from a survey participated by 12,230 people, including customers, for four months starting August 2016, which was a much higher score compared with other major hospitals’. The photo shows a signboard detailing the receipt of the award, which is hung at the front-gate canopy of the East Building.

This year’s survey was conducted for four months starting August 2016. A survey of innovation capability; employee, customer, and social values; and corporate image was conducted with 12,230 people, including 7,440 executives in the medical industry, 230 securities company analysts, and 4,560 consumers, resulting in the highest scores in all assessment categories as well as in the quality of 12 detailed elements. The highest score was obtained especially in the quality of medical services, efforts to satisfy customers, the leadership’s management capacity, financial soundness, and employees’ welfare and work environment. It is a valuable achievement since excellence was recognized even by competitors’ medical professionals and employees who participated in the general assessment and gave high scores.

AMC jumped nine spots to 21st from last year in the survey of all-star companies in all industries in Korea. Since its first entrance in 2014, AMC has made it to top 30 for four years in a row.

An official of the Korean Management Association Consulting (KMAC) said, “Today the world makes admired companies a role model for business management. Those who were chosen as admired companies in other countries are mostly innovative companies that lead each industry based on inimitable products and service quality. Admiration is the ultimate accolade enjoyed by companies who led the development and innovation of the industry with continuous trust in all value areas.”

“Only 62 have been chosen as the most admired 30 companies so far in all industries. It is very meaningful for AMC to be named on the list for four consecutive years,” he added.

As this reputation was known far and wide, patients on whom hospitals had given up, even in Japan and Israel, come to us. AMC’s internationally recognized surgical techniques are transferred to underdeveloped countries in Asia through the Asan in Asia project. Around 500 foreign medical professionals from about 40 countries visit AMC every year to receive training. Medical professionals from the University of Minnesota Hospital, who have taught Korean doctors in advanced medical skills since 1950, started learning the skills for living donor liver transplantation at AMC in 2016, which got media attention.

Our global standard system in providing patients with safe, optimal treatments is gaining credibility. The AGS (Asan Global Standard), which is AMC’s standard model of medical services, with 172 regulations in 14 areas, paved the way for the creation of a patient safety–oriented organizational culture along with the infection control system first developed in Korea and medical care support infrastructure.

The leader of the Laboratory Medicine Team, Choi Mi-ok, who attended a certificate award ceremony for an admired hospital on February 24, said, “Being admired has a special meaning to anyone. Whenever I learn of the news that our hospital has been chosen as the most admired hospital in Korea every year, I feel so moved and proud. This reputation will encourage everyone at AMC, and I hope this becomes an opportunity to hold fast to the values we pursue.”

The director of operations support, Yoon Je-sik, said, “Today’s social recognition and trust was achieved as a result of all employees in AMC working hard for their share of responsibility and roles, following the basic rules. Every time we encounter any hardship in the future, we can find answers if we try to go back to the basics.”

The president of AMC, Lee Sang-do, also said, “I’m so proud and honored that AMC was chosen as the most admired hospital. Admiration implies dignity to be maintained by a leader in medical advancement and responsibility for our every thought and action. I hope this serves as an opportunity to reflect on our responsibility and roles for society.”

AMC serves as a quaternary hospital that patients with severe conditions can rely on with confidence and hope, having performed around 60,000 sophisticated surgeries and treatments every year. The photo shows a medical team, including the chairman of the Asan Cancer Institute, Yu Chang-sik (center), performing a surgery for colorectal cancer.

Since 2009, AMC’s overseas medical volunteering teams have visited nine underdeveloped countries, a total of 35 rounds, to treat around 41,000 patients. The photo shows Professor Sun Woo-sung of the Department of Family Medicine (first from right), who was one of the participants of the medical volunteering trip to Sindhupalchok, Nepal, in September last year to treat a patient.